Amscusat is a teenager like others, who lives in family, goes to school, meets with friends, has desire and fear of growing up. He’s travelling on the gravicycle, cycling through two suspended meters above the ground; to reach faraway places he uses the de-composers of atoms called “whisk” or gravitational bubbles, and the planet on which they live has two Suns and two Moons. And when he is a little rough, because the next day he should support the challenging aptitude test in ” spheres of time,” before falling asleep he turns on the dream-tape of an alien race.

So, between a visit to a large spaceship docked in orbit before flying out to the front, and the reading of the sports news on the video magazine containing sheets of gravifootball, he is asking about his future: will he become a secret agent on a mission against the enemy of the allied creatures or a time-traveller on some worlds to be freed? Shaper of new substances or psychic help in analysis of alien materials?

Following Amscusat on his adventures, we are going into a world where everything we normally consider science fiction becomes everyday life and dissatisfaction and emotional turmoils of this teenager seem like an attempt to orient himself and find his own place in a complex reality with a lot of stimulations. Each page reveals details of an amazing life that fascinates and amuses, and invites us to never put edges to our imagination. The future is always around to be created.

Ancient history of humankind or science-fiction?

Amscusat is a teenager who, according to the custom of the space-time he lives in, shares his studies, friendships and adventures with a wide variety of humans, animals and plants. Despite the advanced technology that characterizes his time, his adventures are framed in a war scenario, a ruthless, ongoing conflict underway since time immemorial. The Enemy, the principle opposing the evolution of any intelligent species, relentlessly pursues the destruction of any planets which get in its way. Is this the story of an indecipherable future or the journal of a forgotten past? 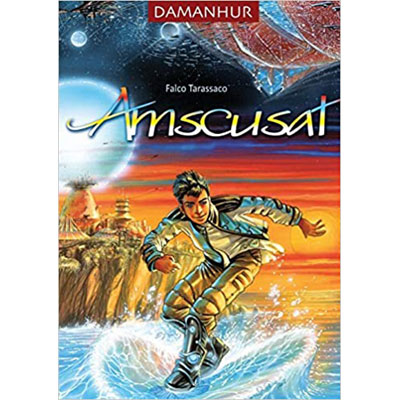